Assam – the state that opens its doors to the North East of India is a land of lush green hills, flowing rivers, thick forests with a wealth of flora and fauna, rolling tea estates, colourful cultural traditions and warm hospitable people. 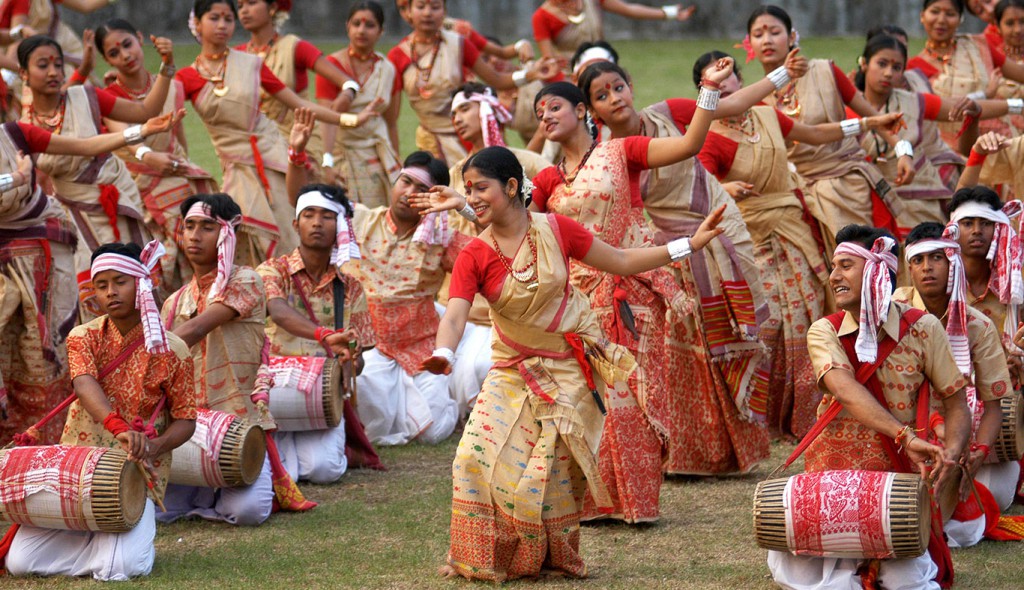 Assam’s 5 national parks and 18 wildlife sanctuaries are host to 25% of India’s flora and unique animals like the one horned rhino, pygmy hog and the tiger too. The vast expanse of the Brahmaputra, the snow clad Himalayan peaks make for an incredible river cruise experience with A class facilities linked to rich experiences of marine and adventure tourism on the way. Such a charm of Assam brings visitors from far and wide. 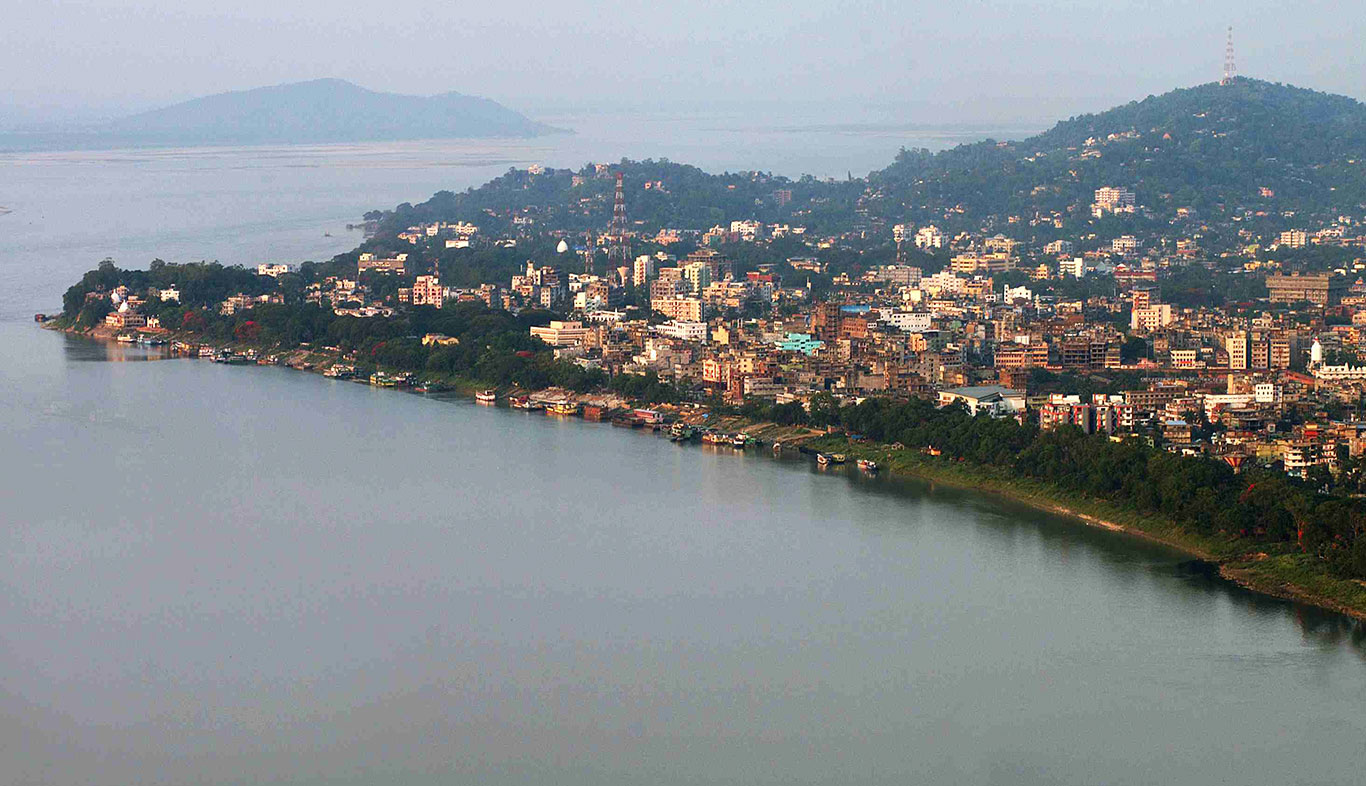 Guwahati is the largest city in Assam and gateway to the North Eastern states of India. It is also known as the city of Temples with Dispur – the capital of Assam located within the city. 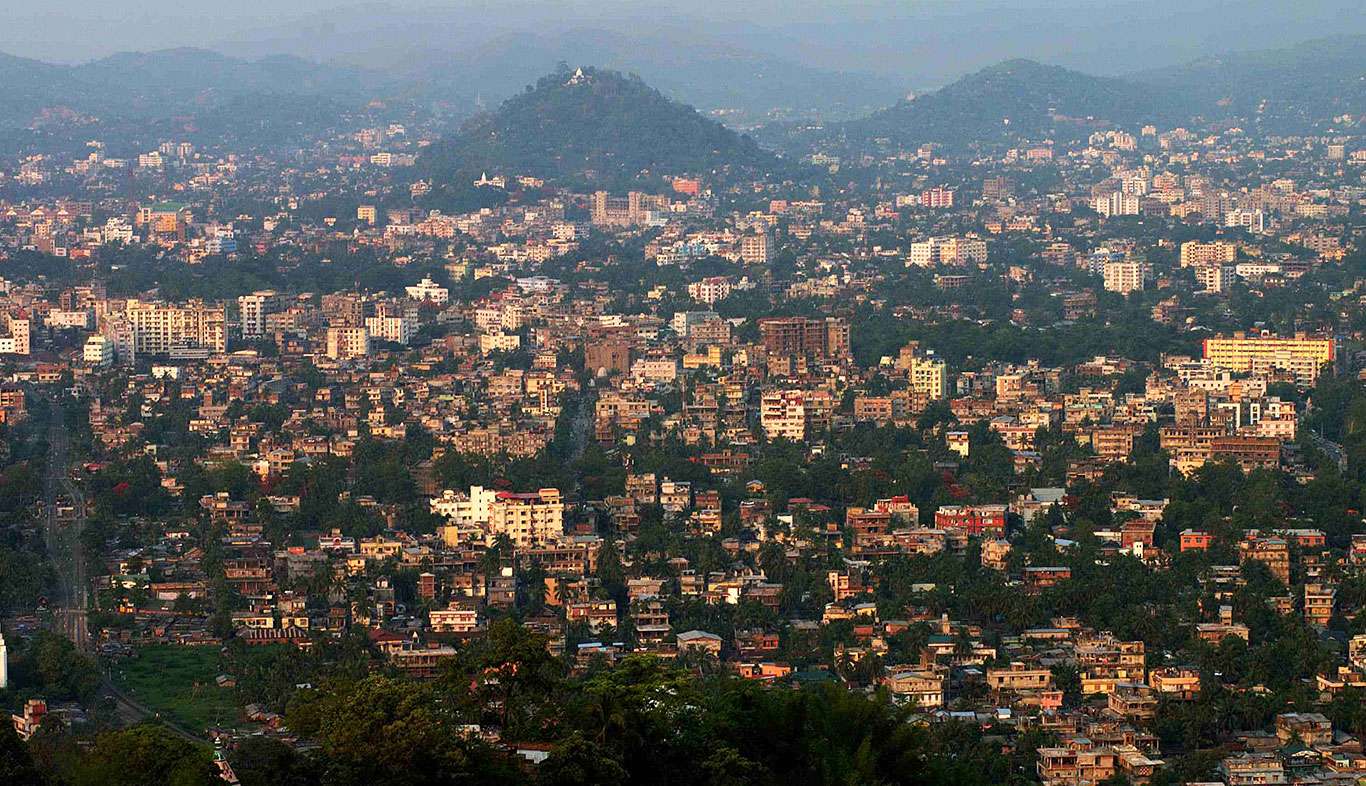 Kamakhya Devi Temple is regarded as the holiest of all the sacred places in India. The famous temple is situated in the Nilachal Hills of Guwahati. The Kalika Purana, Yogini Tantra and the Puranas tell us various stories and legends with regards to the origin of the Kamakhaya temple. 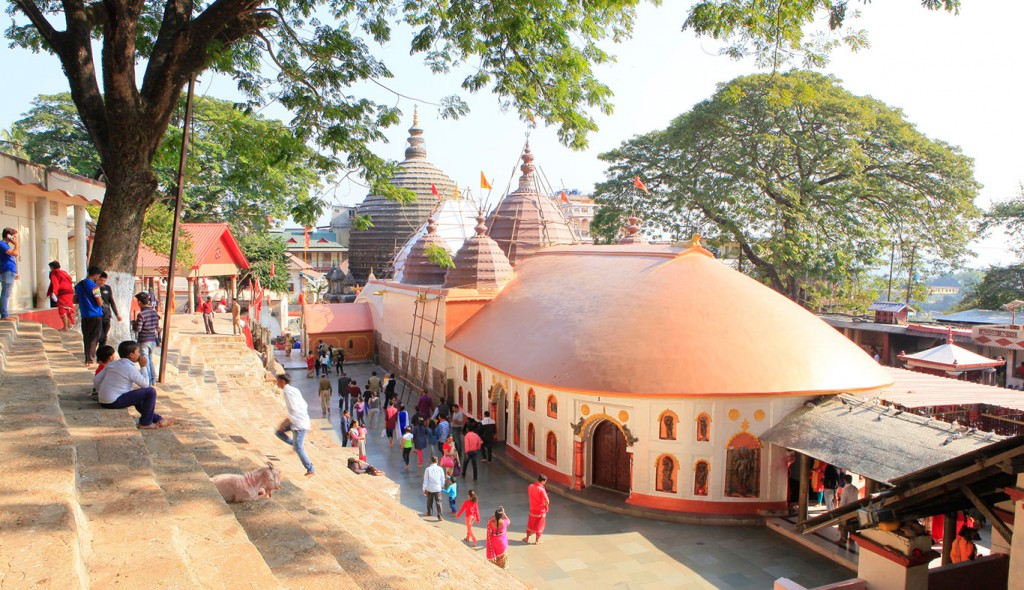 The peacock island as the name suggest, gets its name from the fact that it looks like peacock feathers from a distance. It is the smallest inhabited river island in the world. The Umananda temple, dedicated to Lord Shiva, was built here during the reign of Ahom dynasty. The island is situated in the very midst of the mighty Brahmaputra in Guwahati. It is believed that Lord Shiva turned Kama Dev into ashes for disturbing his prayers. Accordingly to another belief Lord Shiva resides in this Island to provide Ananda or Happiness to his wife Uma and hence the island is named Umananda. Since early times this secret island has been an attraction for pilgrims. Today the presence of the Golden Langur is an attraction to both local and foreign tourists. Journey to this island through the flowing waters of Brahmaputra is full of excitement and thrill. 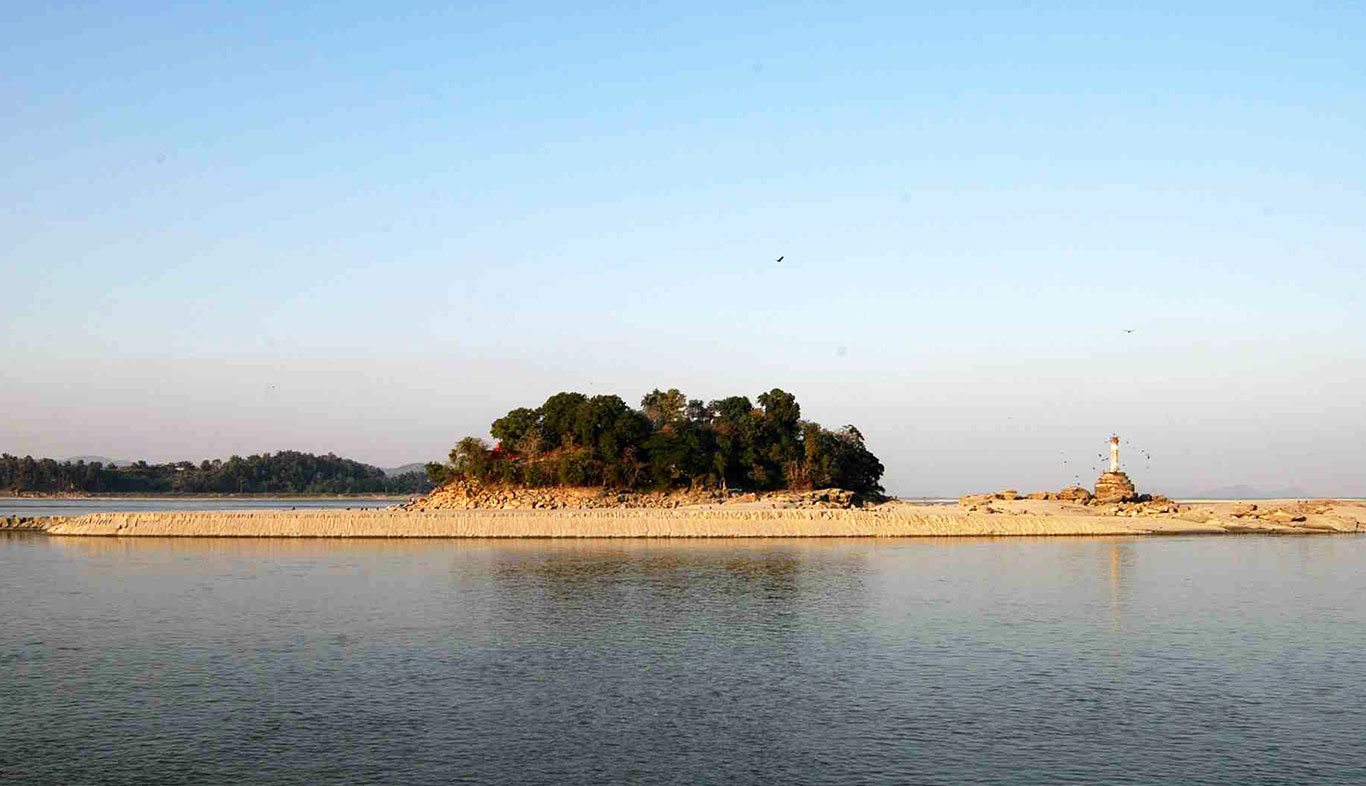 In Guwahati you should not miss going on a 2 hour dinner cruise on the Brahmaputra river offering delicious food, stunning scenery with folk dance performances and music on board.

For shopping you can visit the Fancy bazaar known as the Chandni Chowk of Guwahati. Here you can shop for designer outfits, traditional jewelry, Assamese caps, tea and gamcha (thin shawl), steaming momos and more.

Manas National park (UNESCO) situated at the foothills of the Himalayas, is about 140 kilometres northwest from Guwahati towards the Bhutan border. It is the only habitat for peacocks in Assam and also a habitat for the one horned rhino. With its unique natural beauty, Manas National Park has biodiversity unique to it. Tourists can enjoy a boat ride across the river Manas situated inside the park and also enjoy elephant rides in the park. The park also provides food and lodging facilities to the tourist. This park is also a Tiger Reserve, Elephant reserve, a Biosphere reserve and home to many endangered species like the pygmy hogs. 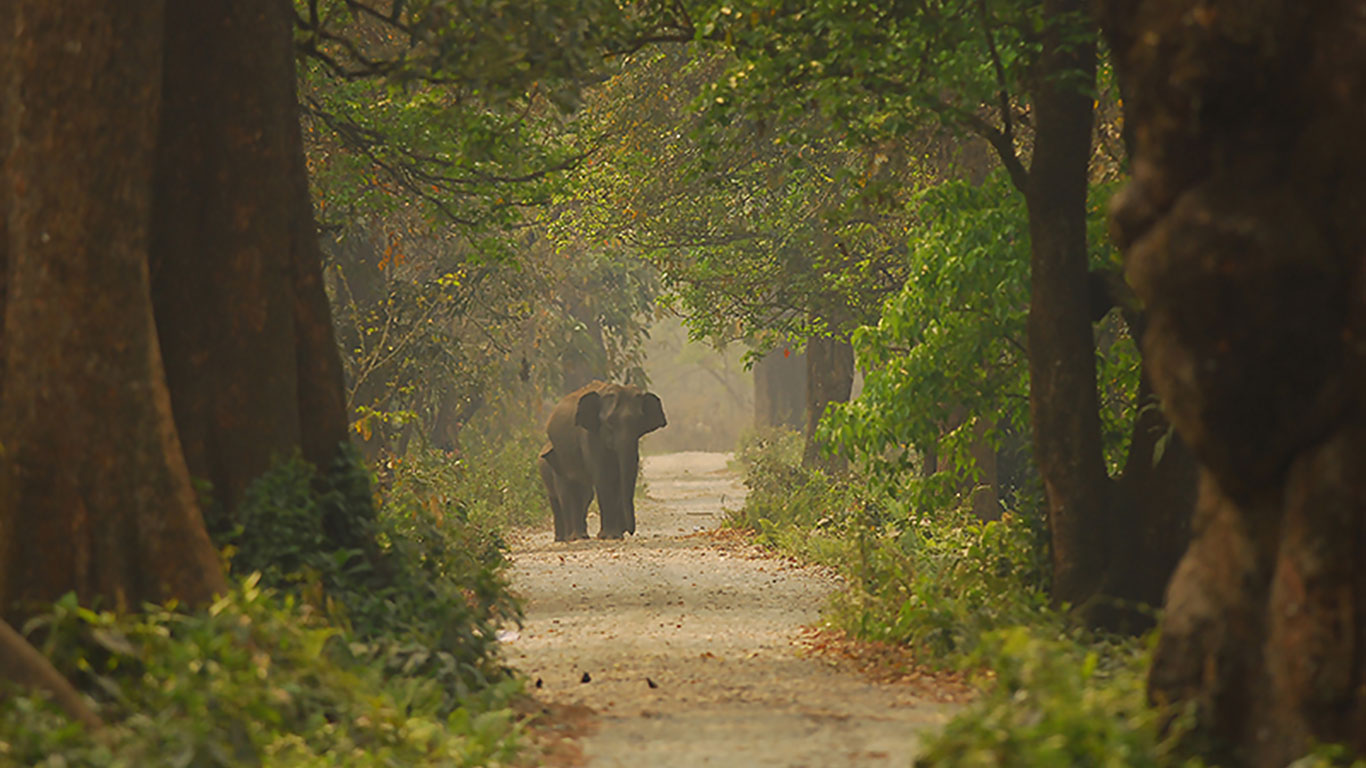 Tezpur is known as the cultural capital of Assam and is located 185 kilometres east of Guwahati on the northern banks of Brahmaputra and between the snowcapped Himalayan mountains. It has its ancient connections with the Indian mythology like “Mahabharata” and is known for its beautiful parks, ancient temples and ruins of Bamuni Hills. One should visit the Nameri National park known for wild elephants, tigers, over 400 bird species like the blue eared kingfisher, hornbills, flycatcher, etc. Orang National Park or Mini Kaziranga known for its migratory birds is also worth visiting. 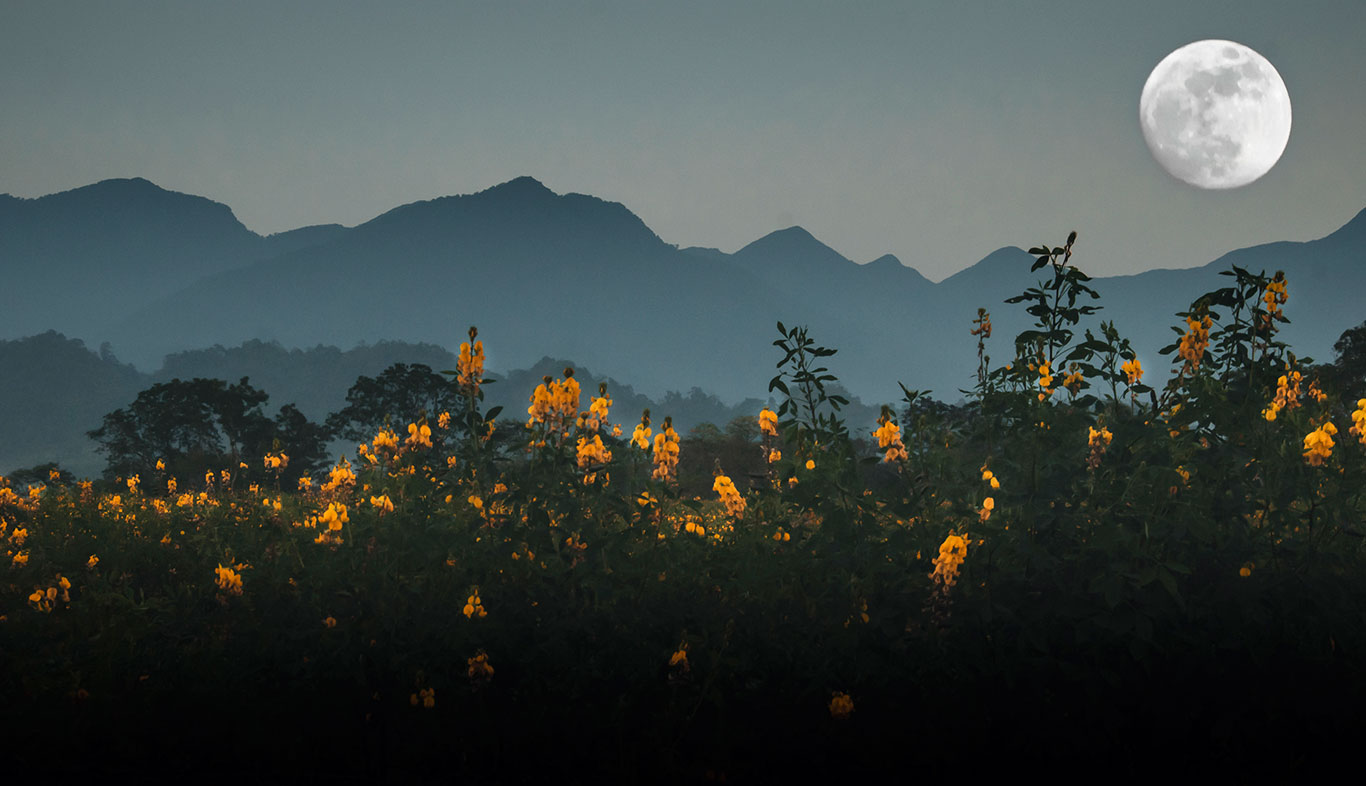 The Kaziranga National Park (UNESCO) famous in the world for its one horned Rhino is situated by the National Highway 200 kilometres east of Guwahati. From Tezpur it is a 90 minutes drive.. The vigilance in the area has led to an increase in the population of the one horned rhino. Tourists from all over the world visit the park to see the one horned rhino – one of the oldest living species of mammals. 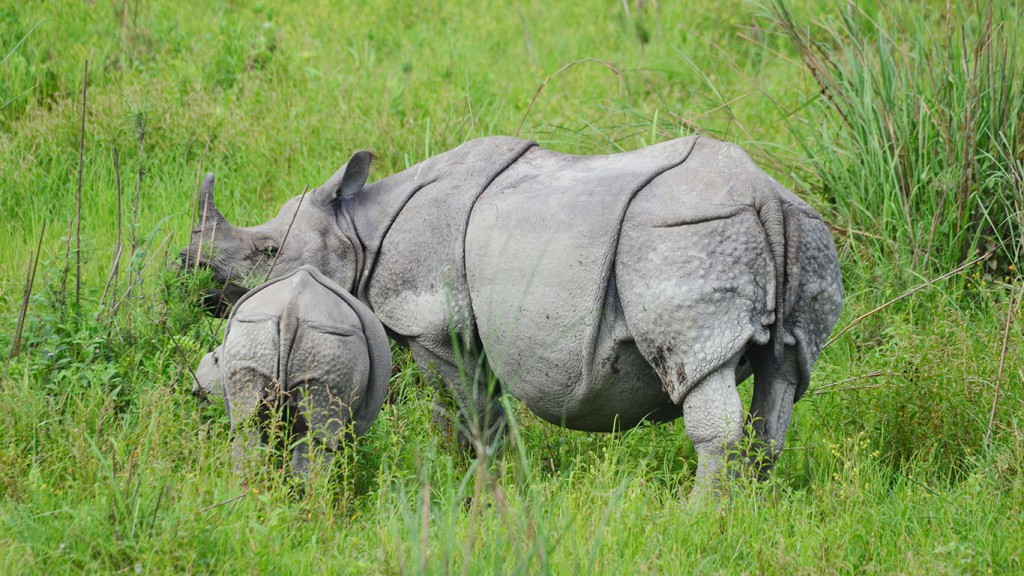 Elephant rides and vehicles are provided to the tourist for visits inside the park. To see the rhino at a very close distance while riding an elephant through the cover of mist in the wintry morning is a lifetime experience. Herds of deer wandering in the park and the panic of other birds and animals due to the presence of other animals and tourists also provide a unique experience to the tourists. 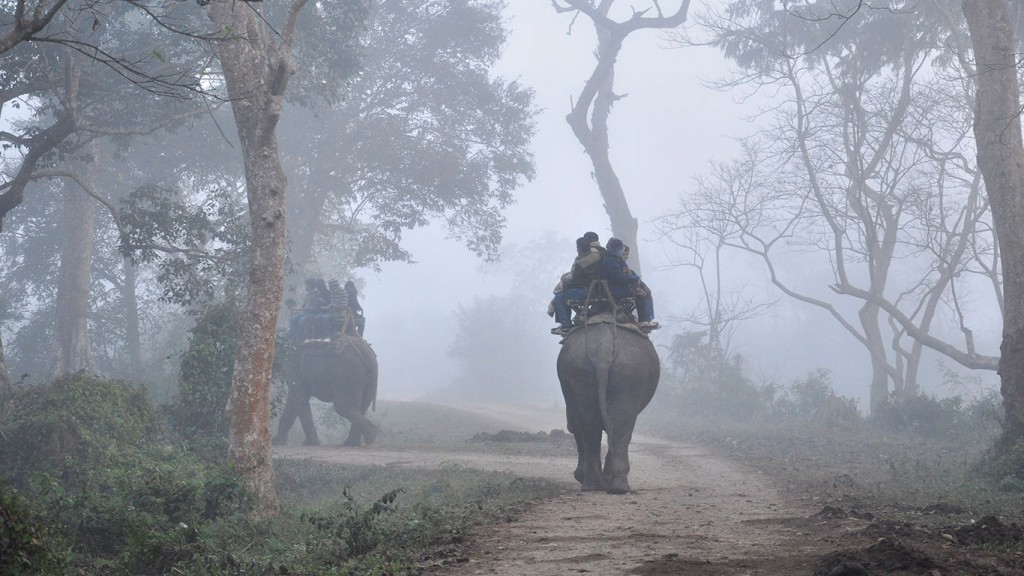 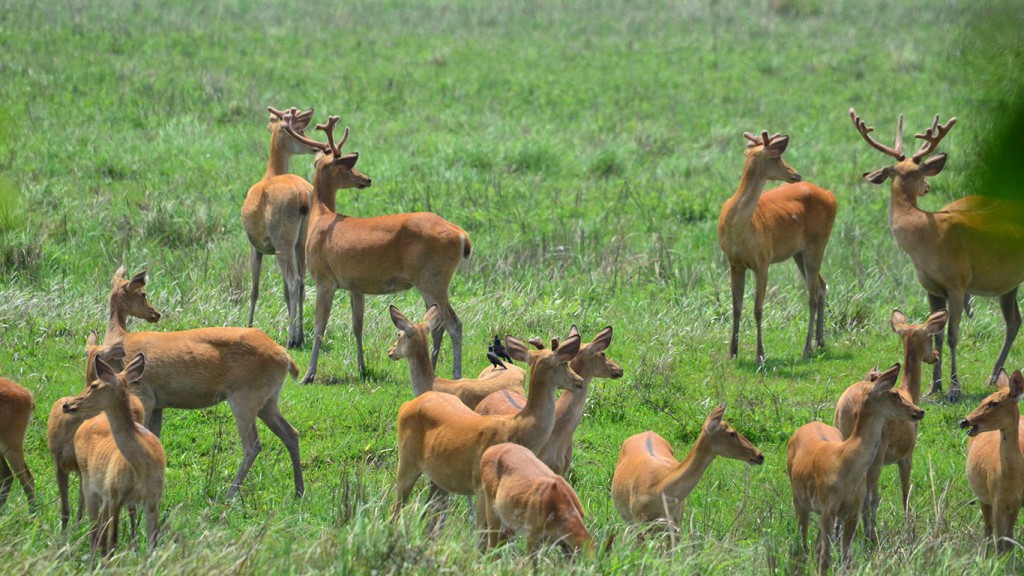 Another wildlife tourist sport in Assam is the Orang National Park situated 150 km from Guwahati and only 31 km away from Tezpur. The park is known as Mini Kaziranga due to its swampy grasslands and wetlands besides the one horned rhino it is also home to the migratory birds like the American pelican. 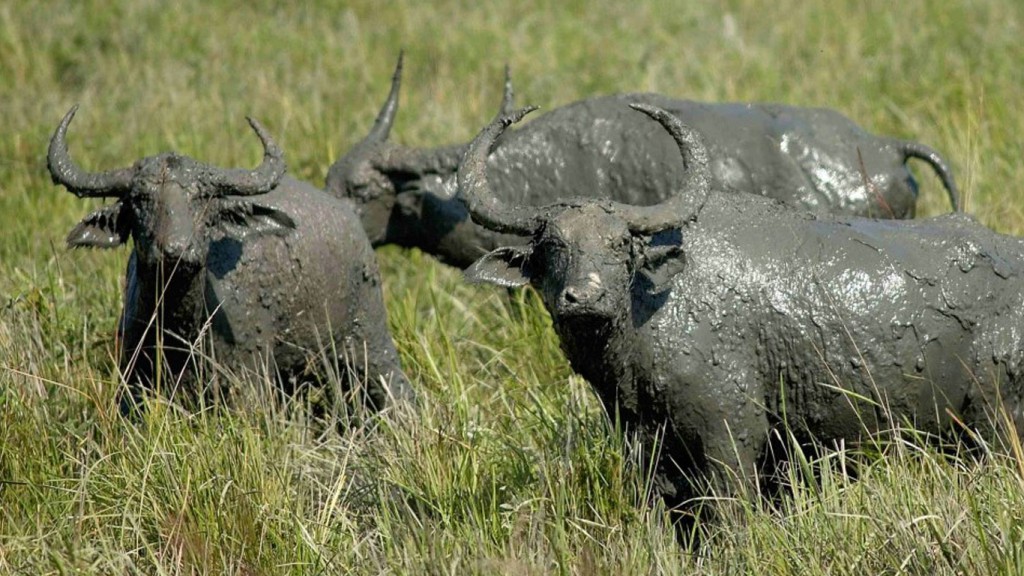 The beauty of tea gardens scattered all over Assam appeals to the eye. The scenic beauty of the rows of plants in the tea gardens of Assam is fascinating while the taste of Assam tea is appealing to the palate. This brings tourist to Assam and places like Jorhat which is often known as the Tea Capital of the World due to its innumerable tea plantations that can be found here. It is also an important docking point for Brahmaputra cruises. 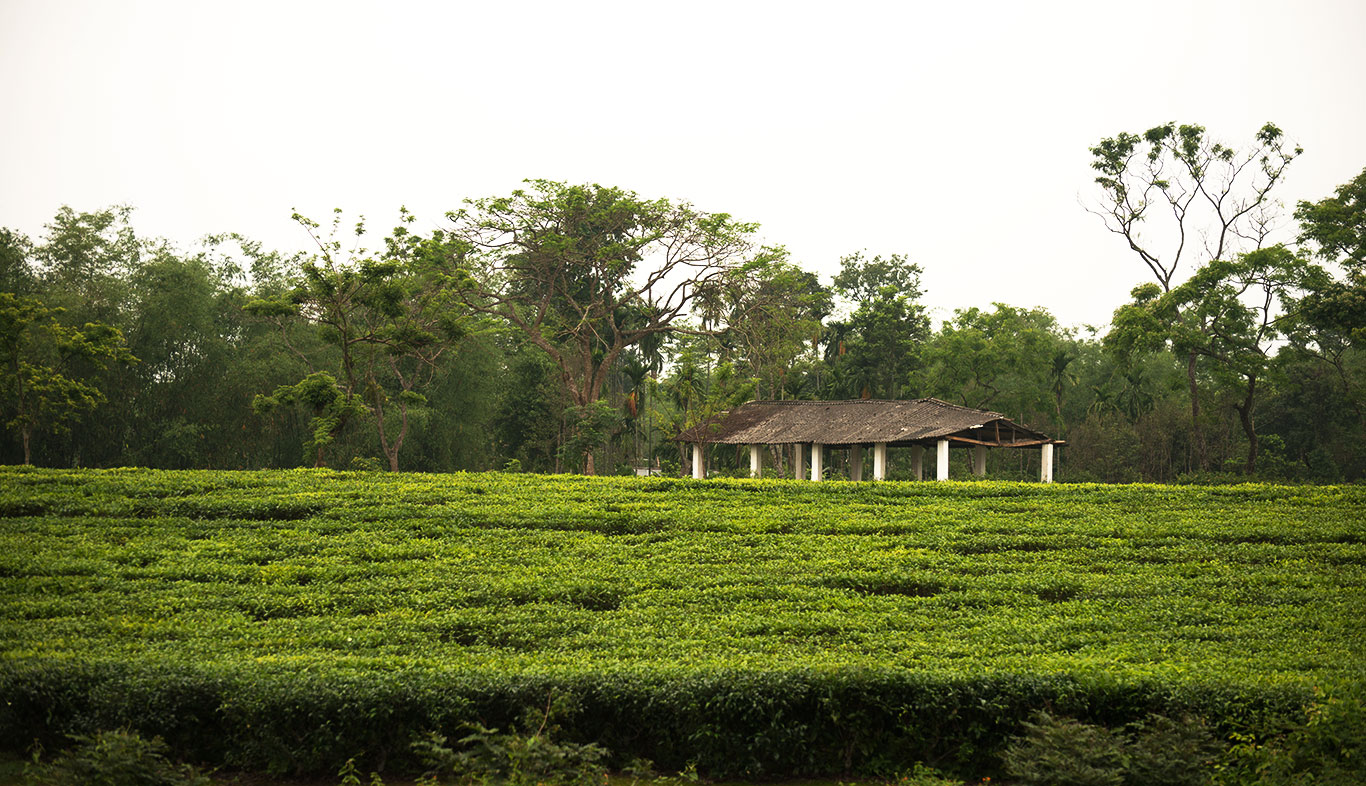 From Jorhat you can visit the World’s largest inhabited river island Majuli. It is a UNESCO world heritage site about 2 hours from Jorhat which includes drive to the ghat, then a boat ride of 1.5 hour to reach the other end of the ghat. Here you can visit the various Satras (religious, social and cultural institutions or monastery), learn the art of mask making, visit potters village, go fishing with the Mishing men (Assamese community) or experience the mesmerizing view of Sunrise or Sunset from any bank of the river. 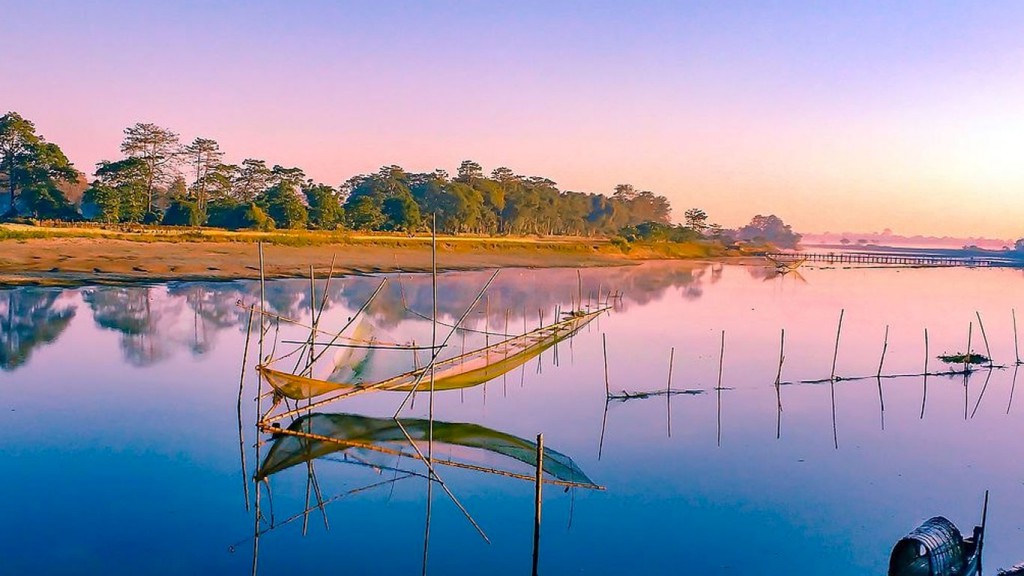 Situated 370 kilometres east of Guwahati and 80 kilometres south from Dibrugarh, is Sivasagar or Sibsagar – the ancient capital of the Ahom kingdom – the longest ruling dynasty in Indian history. During the 600 years of reign, Ahom kings constructed numerous memorials in and around Sivasagar. The presence of several Ahom monuments around Sivasagar has made it into a significant tourist spot.

Situated right at the heart of the city is a significant monument, the Sivadol, a Shiva temple constructed during the 17th century. Sivasagar is a site of heritage tourism due to its ancient architecture and monuments like the Talatal Ghar, Rang Ghar, Gargaon Palace constructed by the Ahoms.

Dibrugarh is an upcoming tourist destination, a colonial town located in eastern part of Assam. It was an important American base during the second World War and is known for its nearby tea estates. It is an important entry and exit point for Luxury cruises on the Brahmaputra river. 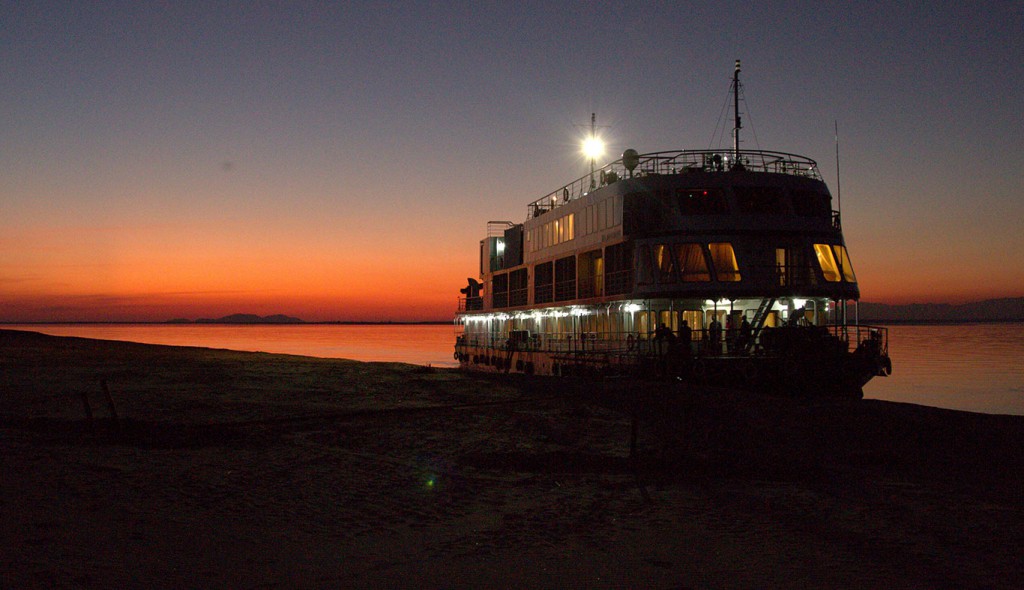 Other places to visit are the Dehing Patkai Wildlife Sanctuary which is the only rainforest in Assam with a wide variety of flora and fauna. It is often called the Amazon of the East. Other wildlife which would be interesting is the tiger, black panther, Asiatic elephant, leopards, etc. 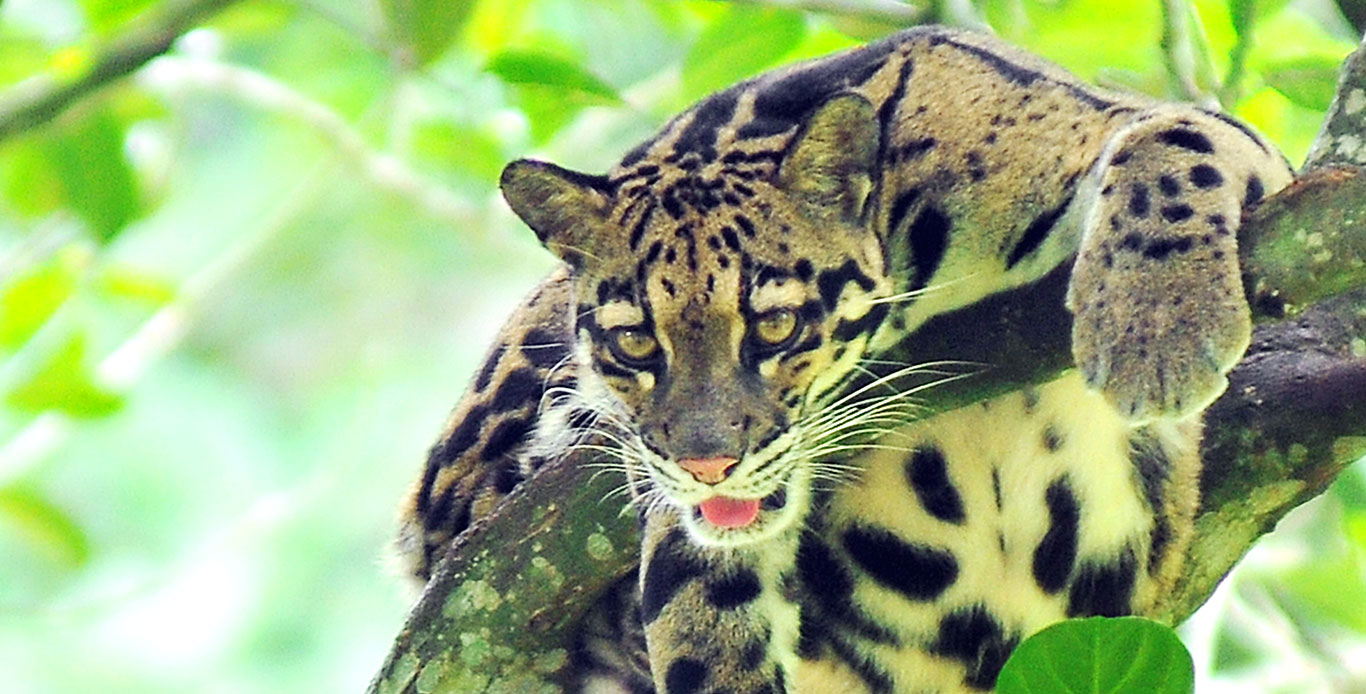 As you now have information about different places to visit in Assam, you can plan your itinerary or take our experts advice. We would highly recommend you to explore Assam by cruising over the Brahmaputra river exploring important places like Guwahati, Kaziranga, Majuli Island, Sivasagar and Dibrugarh.

Our travel experts at Namaste Tourism will be delighted to plan your itinerary based on experiences that you wish to include whilst visiting Assam and North East India.